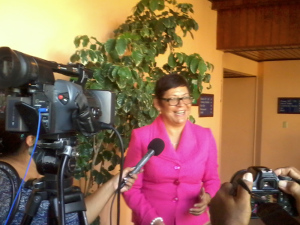 The Economic Development Council (EDC), an economic advisory body to the Prime Minister, said this week that the purpose of the World Bank’s annual Doing Business Report, which reportedly assesses the degree of ease of doing business in the 189 countries studied, has been grossly misunderstood.

“According to the World Bank’s own Doing Business Team, from as far back as 2005, the Doing Business Report was never designed to decide policy reform,” Amparo Masson, the executive director of EDC’s technical unit, the Private-Public Sector Dialogue, informed. “It was to be used as a tool to help support other policy-relevant research.”

Masson referenced two separate World Bank documents in which the DB Team had sought to clarify the misconceptions that feed the controversies surrounding the report. In the first report, entitled “Doing Business Indicators: Why We Aggregate, and How to Do It”, the Doing Business Team explained the intentionally simplistic statistical methodologies utilized in Doing Business: “The Doing Business methodology does well on simplicity and it is is easily adjustable to relate to specific economic targets”.

While the indicators have been criticized for their tendency to be weakly related to specific economic targets, Masson explained that the DB Team had intended that the individual (cardinal) components could be utilized to inform priority areas once used in conjunction with regression analyses. “For example, let’s say the economic target of most importance to us is ‘living standards’, when you follow the DB Team’s suggestions, you’d find that only three out of the ten indicators are significant: trading across borders, enforcing contracts, and resolving insolvency,” Masson added. “One would also notice that ‘trading across borders’ carries the strongest weight, as it pertains to improving living standards.”

Masson also explained that this finding shouldn’t be looked at isolation, because both the Inter-American Develop Bank (IDB)’s immediate past Country Economist for Belize Dougal Martin’s recent report, “Rekindling Economic Growth in Belize“, underscored trade’s role in boosting Belize’s living standards. This motif is also highlighted in the soon to be publicized Growth and Sustainable Development Strategy (GSDS, 2015-2018) for Belize.

“Now, used collaboratively with Martin’s and the government’s GSDS, we could now say that it is in our best interest to focus our attention on improving trade,” she added. “This is exactly in line with the caveat given by the World Bank’s Doing Business Team in their responses in the ‘Common Misconceptions About Doing Business‘ document.

In the “Common Misconceptions” document, the DB Team stated: “While Doing Business is a powerful tool for catalyzing reforms in business regulation the indicators are not used by policy makers as the only source in structuring reform programs. Over the past ten years, most reforms relating to Doing Business topics were nested in broader programs of business regulatory reform aimed at enhancing economic competitiveness.”

Based on DB Team’s own descriptions, the report was never to be looked at as the “final word” on a country’s investment climate, or policy direction; but rather, it is simply a tool to be used in conjunction with other economic documents, tools, methods and policy research.